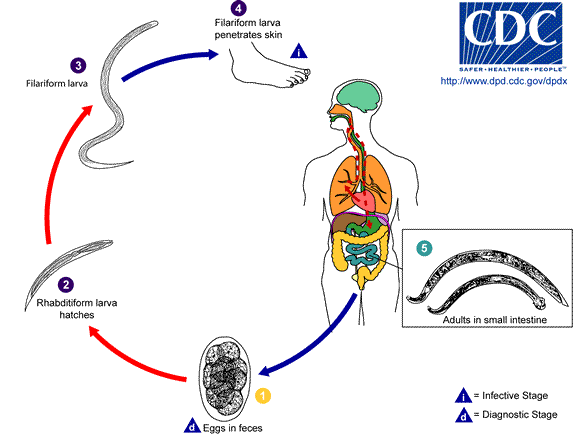 Hookworms are one of the soil transmitted helminths (STH). People become infected when they come in contact with the infective stage in the soil. After penetrating the skin, the larva migrates via the lung to the small intestine, where it matures and attaches to the small intestine to feed on blood. Heavy hookworm infections cause anemia, which is especially devastating in children and pregnant females.  The World Bank estimates that more than 20% of the disability-adjusted life years (DALYs) lost from communicable diseases among school-age children living in endemic areas are a direct result of hookworms and other intestinal nematodes. Current control strategies are limited to periodic de-worming of infected individuals, which is limited by rapid re-infection rates and the development of drug resistant worm populations. The development of new drug targets and vaccine antigens will require a better understanding of hookworm biology, particularly the infective process.

During infection of the definitive host, the third-stage infective larva (L3) of hookworms encounters a host-mediated signal that re-activates its arrested developmental programs. Execution of this developmental program culminates in the establishment of a successful parasitic relationship. This transition from the free-living L3 to the parasitic L3 is therefore a critically important, but poorly understood, event in parasitism. We have developed an in vitro system, in which larval feeding is used as a marker of activation, to model the early events of this “transition to parasitism” in hookworms. This process is analogous to recovery from the developmentally arrested Caenorhabditis elegans dauer stage. An insulin/insulin growth factor signaling (IIS) pathway mediates dauer recovery by negatively regulating the forkhead transcription factor DAF-16, thereby causing the expression of the normal developmental program. Our data indicate that hookworms share several IIS pathway steps with C. elegans, and that inhibition of IIS prevents hookworm L3 activation. We have also shown that the DAF-16 molecule from the hookworm Ancylostoma caninum (Aca-DAF-16) binds to the same regulatory sequence as does the Cel-DAF-16, and can rescue C. elegans daf-16 mutants when expressed as a transgene.

The obligate requirement for a vertebrate host has hindered the development of powerful genetic and molecular techniques like those available for the model nematode Caenorhabditis elegans. These tools are required to better understand expression and function of genes that represent possible drug and vaccine targets. Currently, functional genetics are limited to using heterologous systems such as mammalian cell culture and C. elegans. While new information has been obtained using these systems, they are unable to provide the complete picture regarding gene function because the genes are expressed in a non-native genomic environment. Conclusive interpretations about gene regulation and function can only be derived from homologous systems. Therefore, there is a pressing need to develop a transformation system for hookworms. This is especially critical if we want to exploit the large amount of data that will become available with the upcoming release of several sequenced hookworm genomes. We are taking several parallel approaches to deliver transgenes into hookworms, including particle bombardment with antibiotic selection, chemical transfection, and pseudotyped retrovirus. We are using use the transposon-based piggybac transfection vector to induce integration of reporter genes into hookworm chromosomes. These tools will allow us to investigate gene expression and function in hookworms, and build the foundation for the future development and use of stable, heritable transgenesis to investigate hookworm gene function.

Developing genetic tools for a new model of infection and immunity

Despite important progress in the field of innate immunity, our understanding of host immune responses to parasitic nematode infections lags behind that of responses to microbes. Similarly, little is known about the molecules nematodes use during infection. The major factor limiting progress in these areas is the obligate requirement for a vertebrate host. The developmentally arrested dauer stage of the free-living nematode Caenorhabditis elegans is analogous to the infective stage of many important parasites, and recovery from dauer has been used as a model for resumption of development during infection. The availability of powerful molecular and genetic tools makes it a useful surrogate for studying some aspects of parasitic nematode infection. However, C. elegans is not a parasite, and the dauer stage is facultative and not obligatory as in PNs. Therefore, a parasitic equivalent of C. elegans would allow more relevant investigations into parasitic nematode infection mechanisms. The insect parasite Heterorhabditis bacteriophora offers great potential as such a model. With its endosymbiotic Photorhabdus luminescens bacteria, H. bacteriophora invades multiple insect species including Drosophila melanogaster fruit flies, which it kills and exploits as a food source for the development of several nematode generations. When the insect cadaver is exhausted, infective (dauer) juveniles (IJs) exit and seek a new host to infect. The obligatory dauer infective stage renders H. bacteriophora as a more representative model of PN infection than C. elegans, and the ability to culture the life cycle on plates will allow studies of the molecular events occurring during infection of the host that are inaccessible using vertebrate hosts. The Drosophila-Heterorhabditis system is considered an ideal model to investigate simultaneously the molecular basis of parasitic nematode pathogenicity and host immune function. However, the major roadblock to H. bacteriophora becoming a powerful model system is the lack of a robust genetic toolkit like that for C. elegans. Until such tools are available, H. bacteriophora will fail to reach its potential as a model for PN infection, development, and host defense mechanisms. We are developing 2 critical tools required for the development of H. bacteriophora as a model for PN infection. We are developing transgenesis in Hb by microinjection, using the transposon-based piggybac vector to induce integration of a reporter gene into chromosomes, and RNA interference (RNAi) to knockdown gene function in H. bacteriophora IJs, using microinjection of double-stranded RNA (dsRNA), and screen candidate genes for a role in infection using Drosophila as a host. This work will lay the foundation for the future development of H. bacteriophora as a tractable model of PN infection.

While there are safe drugs currently available to treat hookworms, expansion of their use in mass drug administration programs (MDA) are expected to lead to the emergence of genetic resistance. Related benzimidazole drugs used against livestock nematodes are already ineffective in much of the world, and a similar fate is predicted for those used against hookworms. While the molecular mechanism of resistance is known for these nematodes, populations of resistant hookworms lack the same mutations, suggesting a different mechanism underlying resistance in hookworms.  We are developing a hookworm strain resistant to benzimidazoles in order to investigate the molecular basis of resistance. Identification of the genetic mutations underlying resistance will allow us to develop tools to monitor emergence of resistance in natural hookworm populations undergoing MDA in time to prevent its spread.

We are interested in developing alternative control strategies for hookworms and other soil transmitted nematodes. We are investigating native plants with anthelmintic activity as indigenous, inexpensive treatments for helminths infections that can be used by infected people for treatment, rather than depending on expensive pharmaceuticals.

MDA efforts to control soil transmitted helminths have been largely ineffective and are ultimately unsustainable, as de-wormed people are rapidly reinfected from their contaminated environment. The only long term, proven successful control method for STH infections is to improve sanitation infrastructure and separate people from their waste.  While building “Western” sanitation infrastructure is cost-prohibitive, there are economically feasible and desirable local sanitation solutions that could be implemented quickly and at relatively low cost. One of the most attractive is biogas technology, in which human and animal waste is fermented in household sized tanks. Biogas produced by this process is used for fuel, and a safe, parasite free fertilizer generated that can be used on crops. We are working with colleagues in China to determine if installation of biogas fermenters in villages can stop transmission of STHs. If so, they represent a sustainable, economic al solution to the diseases caused by STH infections.  A review of control efforts and biogas can be found here.

Illustration of a typical Chinese fixed dome 3-in-1 biodigester. Waste from the toilet and pig pen are fed into the inlet, and undergo anaerobic fermentation in the chamber, releasing biogas which is piped into the house for use as fuel. Effluent is removed periodically from the overflow tank and used as a nitrogen-rich fertilizer.

GIVE NOW
MAKE A DIFFERENCE